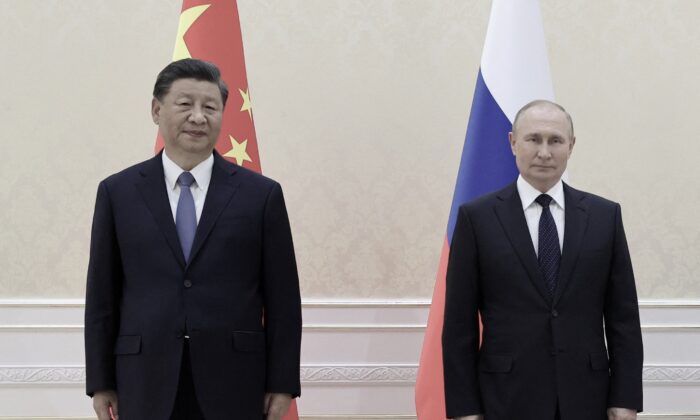 Putin Is Now Xi Jinping’s Myrmidon: The Consequences of the SCO Meeting

The Shanghai Cooperation Organization’s meeting this month in Samarkand, Uzbekistan, was notable for two reasons. First, it was Chinese Communist Party (CCP) leader Xi Jinping’s first visit outside China since the COVID-19 pandemic. Second, the meeting showed that Russian leader Vladimir Putin is subordinate to China. Both are significant and reveal Xi’s growing confidence in his position to create an anti-Western bloc of nations and as the leader of the Sino-Russian partnership.

At their meeting on the summit’s sidelines, the first since they met at the Beijing Winter Olympics in February, Xi expressed support for Russia’s invasion of Ukraine. There was also the pledge to advance their “core interests” and offer a “united front” against the West. Russia also offered its support for the CCP’s claim to Taiwan. China is increasing its oil purchases from Russia in an effort to boost the Russian economy in the face of Western economic sanctions. No doubt, they conducted an assessment of their relationship, and future goals and plans were secretly discussed.

Unfortunately for Putin, he is now the supplicant in the relationship. Russia is increasingly dependent upon China and India for energy purchases. Putin has been drafted by Xi to serve in his anti-Western alliance, which costs him his autonomy. Xi is anti-Western because he seeks to overthrow U.S. power and position in the world and shackle the world to the CCP’s ambitions. Putin’s interest would have been better served by emerging as the tertius gaudens of the conflict between them. By leaning to one side, the perceived weaker side, he might have maximized Russia’s interests and freedom of action.

Now that Putin has tied Russia’s interests to China, he will walk the path Xi requires of him. This will require Russia to accept diminished influence where Moscow’s interests conflict with Beijing, such as in Central Asia, and to serve as an instrument of distraction for the United States and its NATO allies while China expands its military power and strategic ambitions. Once Putin has served his usefulness, Xi will overthrow him.

Fortunately for Xi, he is dominant in the relationship, which is favorable for China. Xi has Putin dependent upon him and thus influences Russian policy. Putin also serves as a lightning rod, attracting the world’s animus for his acts, while Xi’s genocide in Xinjiang remains too often unremarked and in the background. An afterthought of the world’s conscience. As a consequence, Xi has secured his northern flank. Russian conventional and nuclear military power is now a tool to be employed in conjunction or apart from China’s military but to serve Beijing’s interests.

The United States has a “two front” problem with which it must contend. The SCO meeting also demonstrates that China is the dominant force in the region. U.S. influence has been on the wane since the George W. Bush administration left the K-2 (Karshi-Khanabad) air base in Uzbekistan, and the Biden administration abandoned the Afghan government and people to the Taliban.

Russian influence is now also weakened as the Central Asian states perceive Russia as a threat due to the invasion of Ukraine and see Moscow as the junior partner in the Sino-Russian relationship. For Xi, this is a remarkable occurrence at the same time that China is waging genocide against Kazakh, Kyrgyz, and Uyghur Muslims in Xinjiang or East Turkistan. As evinced in Samarkand, China’s western flank is as secure as it has been in recent years.

With two flanks secure and the expansion of Xi’s ability to project power, the United States and its allies should expect the CCP to center its aggression on its southern and eastern flanks. This aggression might be kinetic—indeed, at some point, it will be so—against India on China’s southern flank or against Taiwan on the eastern. But China’s pressure will continue to employ all the tools of statecraft to bring its might to bear to cause the change it wants.

Thus, the world should expect diplomatic, ideological, and economic pressure to be employed against both, while China also seeks to undermine the governments of India and Taiwan. We should also anticipate the continued expansion of the CCP’s domestic influence in those countries through the united front and other overt and covert efforts.

It is a new world. Soviet dominance of China during the Cold War is now reversed. The CCP calls the shots in the relationship due to Putin’s strategic idiocy. Having China’s northern and western flanks secured is a key step toward Xi’s greater belligerence. If Xi has a successful 20th Party Congress, as is likely, he will be securely in control of the Party, and so a second component will be in place.

As a result, the United States, its allies, and partners must move beyond anticipating aggression to recognizing its certainty. This compels the strengthening of Taiwan’s ability to deter China with a conventional deterrence backed by the extended deterrent, amalgamating conventional and nuclear forces from the United States, Japan, and NATO allies.

Bradley A. Thayer is coauthor of Understanding the China Threat and Director of China Policy at the Center for Security Policy.
https://www.theepochtimes.com/putin-is-now-xi-jinpings-myrmidon-the-consequences-of-the-sco-meeting_4740549.html