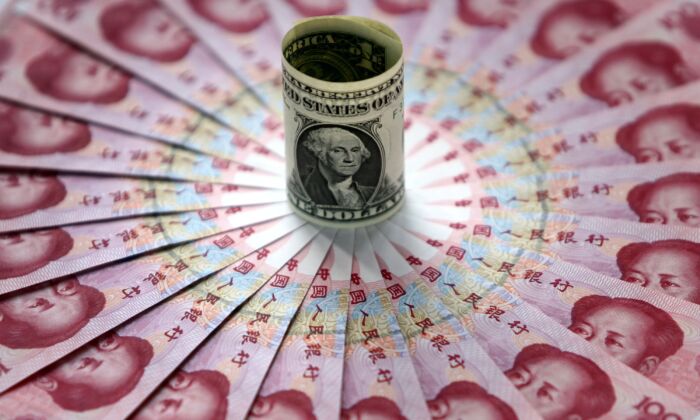 CCP Partners With Bank for International Settlements to Displace the Dollar

“We will cultivate a trading center and pricing mechanism that puts China first (以我为主) and actively promote settlement in local currency.” excerpt from the Chinese Communist Party’s (CCP’s) 14th five-year plan for 2021–25.

The CCP’s yuan liquidity pool with the Bank for International Settlement is not just a challenge to the dollar, it’s also one more example of China’s increasing influence over global organizations.

The CCP has been trying for years to internationalize the yuan as well as decrease the dollar’s dominance in international trade as both an exchange and reserve currency. On June 25, the People’s Bank of China announced its plan to partner with the Bank for International Settlements (BIS) and five other central banks to create a yuan liquidity pool aimed to stabilize economies during periods of market volatility. Apart from the PBC, the founding members of the new pool are Bank Indonesia, the Central Bank of Malaysia, the Hong Kong Monetary Authority, the Monetary Authority of Singapore, and the Central Bank of Chile.

Under the terms of the agreement, each member will contribute $2.2 billion worth of dollars or yuan to the pool known as the Renminbi Liquidity Arrangement (RMBLA). The balance will be held by BIS which will release funds to members, in times of need, through a collateralized liquidity window.

Over the decades, BIS has cooperated with the central banks of reserve currency-issuing countries to implement liquidity support packages, which they provide to other nations during times of market stress and instability. The Yuan Liquidity pool is the first such arrangement that has been made using yuan and is a step toward achieving the CCP goals laid out in the 14th five-year Plan. This plan calls for a return to globalization and a gradual internationalization of the currency.

The plan also refers to the “weaponization of finance in recent years,” which is a veiled reference to the U.S. economic sanctions against Russia in response to the invasion of Ukraine. Among those sanctions was a ban that blocked seven Russian banks from using the Society for Worldwide Interbank Financial Telecommunication (SWIFT).

In an attempt to insulate itself from a U.S.-dominated financial system, China created its own SWIFT-like system in 2015 called the Cross-Border Interbank Payment System. In the same year, China managed to have the yuan added to the International Monetary Fund’s (IMF’s) special drawing rights currencies. In 2020, U.S. sanctions on CCP officials over the dissolution of Hong Kong’s freedoms accelerated Beijing’s efforts to circumvent the U.S.-led global financial system. To this end, they have been in negotiations with Saudi Arabia to settle oil trades in yuan and to settle trade with Russia in rubles or yuan. There have also been discussions through the Belt and Road Initiative for African countries to increase their yuan reserves and to settle trade with China in yuan.

Russia has served as a cautionary tale for the CCP. Seeing the damage that U.S. sanctions and removal from the SWIFT system can do to an economy, Xi Jinping is redoubling his efforts to create a parallel China-led global financial system. Given the current state of the Chinese economy, with growth projections the lowest in decades, many analysts feel it is unlikely that China would make a move on Taiwan until it has first found a way to function outside of the U.S. system and without dollars.

The U.S. Federal Reserve’s increasing interest rates to combat inflation has attracted investment to the United States, but it has also made borrowing in U.S. dollars more expensive. As the Bank of China has so far refused to raise interest rates, borrowing in yuan may be more attractive for the five member countries of the RMBLA. In August, the yuan’s allocation in the IMF’s special drawing rights currency will be increased to 12.28 percent, a signal that the yuan is becoming internationalized. Currently, the yuan accounts for only 2.14 percent of global payments. As China is a major trading partner of the other RMBLA members, it may become expedient for them to hold more yuan in reserves and to settle trade with China in yuan.

So far, the internationalization of the yuan has been slowed by the CCP’s tight controls on capital flows, manipulation of the currency, and lack of transparency. However, the new cooperation with BIS will put the world one small step closer to yuan globalization while the CCP moves toward its goal of financial independence and a yuan-backed world financial system.

Antonio Graceffo, Ph.D., has spent more than 20 years in Asia. He is a graduate of the Shanghai University of Sport and holds a China-MBA from Shanghai Jiaotong University. Graceffo works as an economics professor and China economic analyst, writing for various international media. Some of his books on China include “Beyond the Belt and Road: China’s Global Economic Expansion” and “A Short Course on the Chinese Economy.”
https://www.theepochtimes.com/ccp-partners-with-bank-for-international-settlements-to-displace-the-dollar_4635182.html