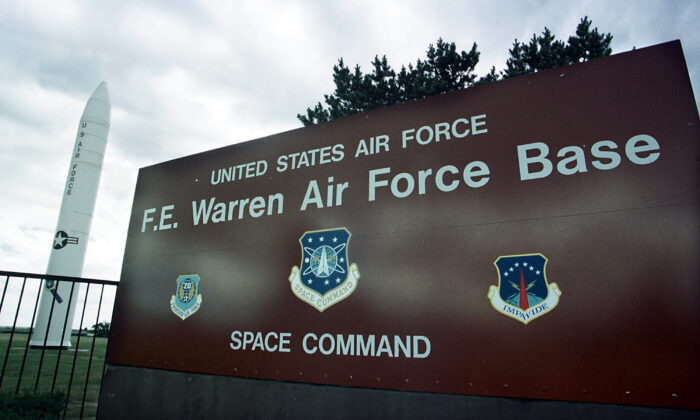 F.E. Warren Air Force Base, a strategic missile base, in Cheyenne, Wyo., an area near a host of cell towers using Huawei equipment. (Michael Smith/Getty Images)

The latest news from China would be funny if it weren’t so tragic.

Beijing allegedly tried to build a 70-foot, white, spy pagoda on a high point in Washington, D.C. The Chinese Communist Party (CCP) planned to courier parts for the pagoda in diplomatic pouches legally immune from search by U.S. officials.

However, the FBI discovered and foiled the CCP’s plan.

It was a foolish gambit but American politicians are the bigger fools. We did not hit back by letting the public know about it. American leaders probably did not want to ruffle Beijing’s feathers when our economic elites are desperate to increase trade with China.

Despite the abundant evidence of double-dealing from China, we keep engaging, like the drug addicts for cheap imports that we have become.

For example, Huawei and ZTE still have equipment in American telecom networks. They sold their components at a loss to telecom companies for installation near military bases, including those from which nuclear weapons deploy. They are now potentially capable of intercepting and disrupting U.S. Strategic Command communications, according to a July 24 report from CNN.

High-definition cameras on cell towers, meant to monitor civilian traffic and weather, can see U.S. military movements. Some of that data goes through Huawei networks that Beijing can easily hack. Indeed, U.S. intelligence caught the feeds being viewed from China.

This is serious stuff.

Imagine if China hacked U.S. nuclear weapons and launched one at Russia. Moscow might respond in kind, causing a war that knocks out China’s two biggest military peers. Beijing could then step into the breach as global hegemon.

Telecom companies identified 24,000 pieces of Chinese equipment for removal, but the money is insufficient. Washington needs to approve another $3 billion to make it happen. So, the plan stalled and Huawei components still operate on American soil.

In the context of increasing security tensions with China, not least from Beijing’s persistent and successful spying on America, Speaker of the House Nancy Pelosi is planning to lead several American lawmakers on a trip to Taiwan and other countries in Asia. It’s a rare ray of light against the China threat emitting from within the Democratic Party.

Pelosi has every right to go, and the trip is a much-needed signal of American support for the small island democracy standing up to history’s most powerful totalitarian country.

In response, Beijing is reportedly threatening to send fighter jets to shadow Pelosi’s ride, which will be a U.S. military plane. That kind of reaction is to be expected given Beijing’s increasing threats over the years.

But the Biden administration is interfering with Pelosi’s right to engage with Taiwan by publicly showing displeasure over the trip. President Joe Biden himself pressured Pelosi by noting that the Pentagon does not support her travel.

That demonstrates American weakness to Beijing.

Pelosi told the press, “I think what the president was saying is [that] maybe the military was afraid our plane would get shot down or something like that by the Chinese.”

U.S. National Security Advisor Jake Sullivan, who along with other senior members of Biden’s cabinet has ties to a China-linked organization called the Asia Society, has indicated American fear, compromise, or both, by also opposing the trip.

The last U.S. Speaker to visit Taiwan was Newt Gingrich in 1997. On that trip he also visited China, where he attended church with the Australian prime minister in Shanghai and publicly warned Chinese officials that America would defend Taiwan against attack. He said they agreed to disagree and moved past the issue and went on to increase economic engagement.

Those halcyon days of American power are gone. The balance of power has shifted since the moment of American unipolarity, and the CCP now thinks it has the upper hand.

They think so in part, because we sent the wrong signals. The failure to continue regular high-level trips to Taiwan is likely encouraging Beijing to accelerate an invasion of the island and take measures to scare the United States and allied forces out of Asia.

In February, a Chinese navy ship shot a laser at an Australian P-8 spy plane, for example. The plane was within sight of Australia’s coast. We did next to nothing in response.

Three months later, a Chinese fighter jet upped the ante. It released aluminum chaff toward an Australian P-8 on a routine flight, some of which entered the jet’s engines. Again, no retaliation.

By turning the other cheek with China, we appear to show a fear that invites more aggression. With that kind of welcome, expect the People’s Liberation Army to increase the intensity of its attacks.

Sadly, Pelosi’s plane could be next.

Anders Corr has a bachelor’s/master’s in political science from Yale University (2001) and a doctorate in government from Harvard University (2008). He is a principal at Corr Analytics Inc., publisher of the Journal of Political Risk, and has conducted extensive research in North America, Europe, and Asia. His latest books are “The Concentration of Power: Institutionalization, Hierarchy, and Hegemony” (2021) and “Great Powers, Grand Strategies: the New Game in the South China Sea” (2018).
https://www.theepochtimes.com/failure-to-respond-increases-chinas-threats-to-america_4620493.html