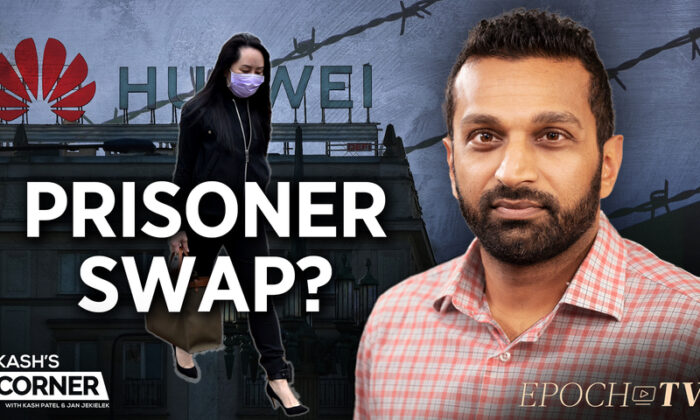 In this episode of Kash’s Corner, “A Three Way Deal?–One Huawei CFO, Two Americans, and Two Canadians,” hosts Kash Patel and Jan Jekielek discuss the deferred prosecution agreement that was given to Huawei’s CFO by the Department of Justice, the events that followed, and the implications of those events.

Huawei is a massive telecom company that provides information and communication technology to Iran and some European countries. Its CFO, Meng Wanzhou, was indicted for breaking several federal statutes for wire and bank fraud. Huawei’s felonious misuse of the banking systems in Iran and Europe brought about the case against it, which started during the Trump administration. Patel explains that a “deferred prosecution agreement is basically, ‘I’m going to temporarily plead guilty to the conduct in the indictment, and then I’m going to get a get-out-of-jail-free card in 6 months time,’ in a year’s time normally.” He said that normally in cases like this, the defendant is monitored in the United States by the Department of Justice, the FBI, and other federal agencies to ensure that the defendant is not committing more crimes and that the agreement is being followed. Meanwhile movement is restricted so that federal authorities are able to contact the perpetrator at all times.

In the case of Wanzhou, she was allowed to return to China, which makes it impossible for any authorities to monitor her or contact her.

Wanzhou was arrested in Canada in 2018 at the request of the United States, which charged her and Huawei with using the U.S. banking system illegally. Her specific crime involved sanctions against Iran to keep U.S. money from moving through the Iranian banking system via transactions that would benefit Iran. Huawei was accused of purchasing a company in Iran, which it originally denied, saying that Huawei had no affiliation with the company that was purchased. In reality, it was a Huawei subsidiary that conducted the purchase. That company was then used by Huawei to funnel U.S. money in and out of Iran to build a 5G network that would ultimately benefit Iran.

Under the agreement, Wanzhou submitted an admission of guilt to the charges, but only did it knowing that she would be released.

Patel explains that he does not agree with the granting of this agreement, because it leads to more illegal activity from financial institutions. Signing a deferred agreement does not mean that prosecution will come at a later time. It means that no prosecution will take place, unless the defendant breaks any of the rules listed in the agreement. Once the monitoring period has concluded, the charge is completely expunged from the record, so the defendant can start over with a clean slate. A fine is also assessed in the agreement, which must be paid before the deferral is granted.

Once Wanzhou was released, two Canadian prisoners were released from China and allowed to return to Canada. China also released two American siblings back to the United States who had been barred from leaving China for more than three years. It was after these releases that the media began using the term hostage diplomacy to describe the exchange. Wanzhou and her family have ties to the Chinese Communist Party (CCP) as does Huawei. Even though the CCP denied having any influence in this matter and claimed the releases were due to “medical reasons,” the speed in which these releases happened after the return of Wanzhou to China suggests otherwise.

In the next segment of the video, Patel goes into detail about Huawei and its operations around the world. Huawei installs 5G networks, which give access to massive amounts of information. A U.S. investigation was launched to monitor the CCP’s global influence and its direct effect on national security. Patel, as a member of the House Intel Committee, was a part of this investigation and traveled to several countries. He found that all of them were involved with the CCP, which was building massive infrastructures in these countries. Many of them do not have the funds to purchase 5G technology, so the CCP pays to have it installed therefore giving them access to all the information on these networks. Most countries cannot repay the CCP for building these infrastructures, so the regime takes ownership and provides a Chinese workforce there to do the labor.

After taking ownership, the CCP can then collect information from the infrastructures they financed and use it to their advantage. Patel explains this is how the CCP infiltrates and takes over countries. One place he visited was Djibouti, which is located in a strategic area in the horn of Africa and is also close to the Middle East. China helped build several infrastructures there, including a port and a military base. The concern for the United States is that American travelers use personal computers and other devices while moving through these countries, so the CCP can access their information. These countries do not do anything to stop China from doing this, because they are relying on the money and structures to improve their nation. Unfortunately, the United States is not placing enough emphasis on monitoring this activity to stop it from happening.

The video concludes with a discussion about reports that the Chinese regime is developing detailed intelligence profiles on every American. China has made this a priority and will continue its pursuits for global infiltration and ultimate domination.

“Kash’s Corner” premiers every Friday at 8 p.m.—exclusive on EpochTV.

Lacy Hall is a native born Texan and lives in South Texas. She earned a bachelor of science degree in English/Education from Howard Payne University. She enjoys research and has a passion for writing entertaining, informative, and relevant content for her readers.
https://www.theepochtimes.com/epochtv-review-hostage-diplomacy_4034096.html