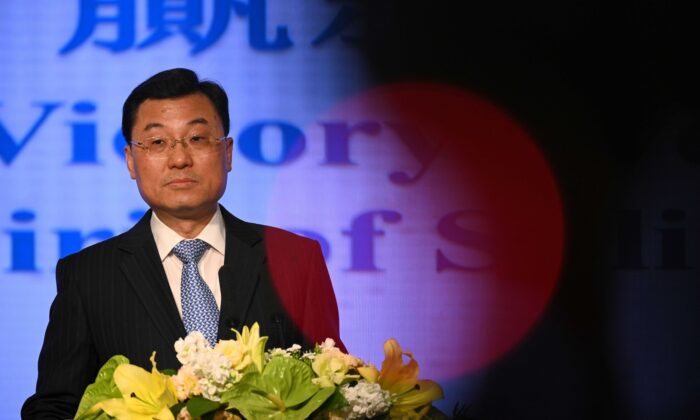 Once again, China’s regime went out of its way to insult Biden administration diplomats.

The mauling this time took place in the Chinese city of Tianjin, on July 26. Deputy Secretary of State Wendy Sherman, the most senior Biden administration official to visit China, was the victim.

Beijing used the meeting with Ms. Sherman, as it used the now-infamous March meeting in Anchorage, not to work with the United States but to launch a propaganda campaign against Washington.

Vice Foreign Minister Xie Feng, for instance, publicly accused the United States of trying to end the Chinese regime. “A whole-of-government and whole-of-society campaign is being waged to bring China down,” Xie said, according to the official China Daily, during Sherman’s visit.

Xie even went so far as to hand Sherman two lists, containing what were portrayed as Beijing’s demands. “China has for the first time given the U.S. a list of red lines and remedial action it must take to repair relations,” Hong Kong’s South China Morning Post reported.

Xie did not let up after Sherman departed Chinese soil. Days later he was issuing additional hostile comments, including one posted on the website of China’s embassy in the United States. “It is,” Xie stated, “the United States, not anybody else, who is the inventor, and patent and intellectual property owner of coercive diplomacy.”

This propaganda blast mirrored the one that immediately followed the mid-March meeting in Anchorage, where China’s Yang Jiechi, China’s top diplomat, and Foreign Minister Wang Yi met Secretary of State Antony Blinken and National Security Advisor Jake Sullivan. Just moments after the first day of that tense encounter, Beijing issued statements inciting, among other things, hatred against America and a global race war against white people, some of its most vicious propaganda in the post-Mao history of the People’s Republic.

It was no accident that Xie was chosen for the task of taking on Sherman. Beijing had first offered the American diplomat, then about to embark on a trip to Japan, South Korea, and Mongolia, a meeting with him, the No. 5 in the foreign ministry. State scrubbed a stopover in China over the intended slight to Sherman, America’s No. 2 diplomat. The U.S. side agreed to a meeting in China only after Beijing offered a sit-down with Foreign Minister Wang, the regime’s No. 2 diplomat and Sherman’s counterpart.

We should not be surprised. “I’ve heard presidents of both political parties say complimentary things about the leader of China,” Trey Gowdy said on his new Fox News Channel show in July. “Are we sending the right message? I mean if we really believe China is responsible for COVID-19 and stealing intellectual property and aggression in the South China Sea, are we sending the right message to them?”

No, Washington is most certainly not. The generous messages American presidents send to Beijing are obviously counterproductive. That messaging, for instance, has led China’s leaders, who are critically reliant on the United States, to believe they hold the high cards.

President Joe Biden in particular is guilty of needlessly giving the Chinese leverage. “Chinese leaders give the impression that the U.S.A. has much more to seek from them than they from Washington,” said Yogesh Gupta, former Indian diplomat and specialist on China-India relations, to Hong Kong’s South China Morning Post, referring to the Sherman meeting. “This time, the Americans were on the defensive as they sought Beijing’s cooperation on a range of issues—climate change, North Korea, Iran, Afghanistan, and others—ensuring that the U.S.A. did not seek conflict.”

Americans have fed the already inflated egos of their Chinese counterparts by telling them how important they are, and those statements have naturally given Beijing far more power in the relationship than it either has or deserves. For decades, U.S. presidents have not used the tools at their disposal in dealings with Beijing. On the contrary, most of them essentially gave China’s despots a veto on American policy by saying that Chinese cooperation was absolutely essential.

In fact, the Chinese are not that essential, and American leaders do not have to listen to them. Take their economy. Last year, China became even more dependent on exports, and it remains extraordinarily reliant on access to the U.S. market. In 2020, China’s merchandise trade surplus with the United States accounted for a stunning 58.0 percent of its overall merchandise trade surplus.

Moreover, China’s financial markets have become even more dependent on foreign capital because of Xi Jinping’s unrelenting attack on his country’s tech sector. Xi began the most recent phase of his months-long assault with the unprecedented last-minute halting last November of Ant Group’s initial public offering, slated to be the world’s largest at $39.5 billion. This year, Xi has wiped more than $140 billion of value off U.S.-listed Chinese tech giants during the last week of July alone, and most analysts believe the carnage will continue.

China, as a result, is needy, requiring foreign cash to replace what has already been lost—and what will be lost as Xi continues to take apart his tech giants. Biden can use his considerable powers under the International Emergency Economic Powers Act of 1977—or, if he is even bolder, the Trading with Enemy Act of 1917—to halt commerce with China and investment into the Chinese markets, ending once and for all the China threat.

Biden’s attempts to build a working relationship have failed, as the Sherman meeting clearly shows.

The best way to deal with China’s regime is not deal with it. That’s a far better message to send than the ones Gowdy is concerned about.

There is no sense strengthening China with American resources, especially when Beijing has shown no interest in dialogue or a constructive relationship with Washington. Xi Jinping no longer wants to accommodate America or compromise with Americans. He prefers to lecture, dictate, demand, and humiliate them.

Wendy Sherman just learned that. China’s diplomats ambushed her. There must be a consequence. It is time to say to Beijing, “No more!”

From the Gatestone Institute.

Gordon G. Chang is a distinguished senior fellow at the Gatestone Institute, a member of its Advisory Board, and the author of “The Coming Collapse of China.” Follow Gordon at GordonChang.com and on Twitter @GordonGChang